Recently, I found a feather on top of a rhododendron bush.  It looked as if it was gently placed there.  It reminded me of how, years ago, I would find feathers all over my home and outdoors in obvious locations.  Warm memories filled my heart.  This was a point in my life when I felt a deep longing to know if there was more to me, something deeper.  I embarked on a journey of self-exploration which led me into what felt like an exciting world that goes beyond what we can see, hear, and touch physically.  It was vast, mystical, and magical.  However, I was filled with so many questions!   A spiritual teacher had said to me “Ask the questions; Put it out there and wait for responses” and so I did.  It began with a feather that dropped from a bedroom ceiling on top of my friend’s head.  I remember her running downstairs right when it happened.  She was wide eyed and in disbelief.  It shook us to the core as we had never experienced anything like this before.  I began to question everything I thought I knew.

As the questions continued, more feathers appeared.  I began to realize that these were from angels.  They appeared in such places as: on top of my bed, on my coffee table, on the seat of my car and one even landed on my daughter’s head from the kitchen ceiling just as she was telling us that she didn’t believe that these feathers came from angels.  I grew accustomed to seeing them all over.  It was a comfort knowing they were all around me.  It was their way of saying that they were present and heard me.

Eventually, the feathers were replaced with other signs and clues that were like breadcrumbs leading me to answers.  I was seeing repetitive number patterns, listening to song lyrics on the radio, receiving visions during the night, cloud formations, etc. etc.  I understood that, when we ask for guidance whether it be through prayers, affirmations, or intentions, we have to pay attention and wait for the responses because they ALWAYS come.  You will feel a sense of resonance that lets you know this is what you were waiting for.  What I learned is that we are never alone, always heard and always supported because this is what love is; this is what love does.

The Tides of Change – Birthing of a New Consciousness

All Fears Can Be Healed! 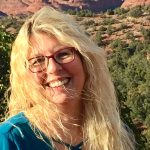 “Through Love, miracles can take place.”